You are here: Home / How to Be Happy / Nine Secrets Happy People Know – Part ONE
Book links are usually affiliate links. This means I earn a small percentage when you click through and buy the book. This costs you nothing extra - it simply allows me to keep my cats in the lifestyle they're accustomed to. 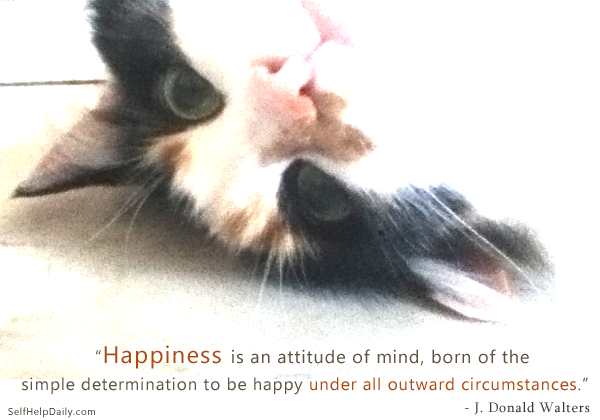 You know the old joke about the weather, right?  Everyone talks about it but no one ever does anything about it.  In the area of Self Help, our “weather” is definitely happiness.  Everyone has it on their mind, and it comes up frequently in conversation.  People want to talk about it, and they most definitely want to possess it, but when it comes to doing anything about it….. they kind of fade into the background.  The reason might be that they just don’t know HOW to be happy.

I lean toward the belief that, as Abraham Lincoln said, “People are about as happy as they make up their minds to be.”  That, of course, doesn’t include people who find themselves in the middle of grief, clinical depression or anxiety, or a physical or mental illness. Depression and anxiety can be serious illnesses that require a doctor’s care and no amount of positive affirmations or “How to Be Happy” articles will cure these issues any more than they would diabetes.

If only that were possible, I’d do all I could to close down hospitals everywhere!

This series of “Secrets Happy People Know” is for the rest of us.

So, Who Are These Happy People and What Can You Learn from Them?

Think about the people in your world.  Some are happier than others, right? Some are so happy, being around them is about like watching an episode of Andy Griffith.  Even when circumstances are foul, they’re generally light-spirited and smiling – maybe even joking around.  The good news is that they aren’t superhuman, so what happy people “have” is available for everyone.  Basically, there are nine secrets that happy people have stitched into the fabric of their lives, probably without even realizing that they’ve done so.  Three are below, the other six will be hot on their heels in the next article in the series.

What some people don’t realize is that happy people feel the same pains the rest of the world does.  If a happy person loses their dream home, for example, they most definitely register the pain.  They cry the tears.  They feel the loss.  BUT they don’t let the situation win.  They stand back up, dry their eyes, and look ahead to the great things that lie in the future.  An unhappy person would use an experience like this as a crutch – a crutch that will only lead them to one of two places:  Anger or Bitterness.  Neither place is worth visiting, let alone moving into.

Unless, of course, you want to.

I didn’t think so! Watch for this series to continue as we uncover more secrets to happiness!

Previous Post: « What Job Roles Can One Gain by Clearing Cisco 300-415 ENSDWI Certification Exam?
Next Post: Tips for Coping with a Hiatal Hernia or Problems with Sluggish Digestion »