You are here: Home / Archives for grouchiness 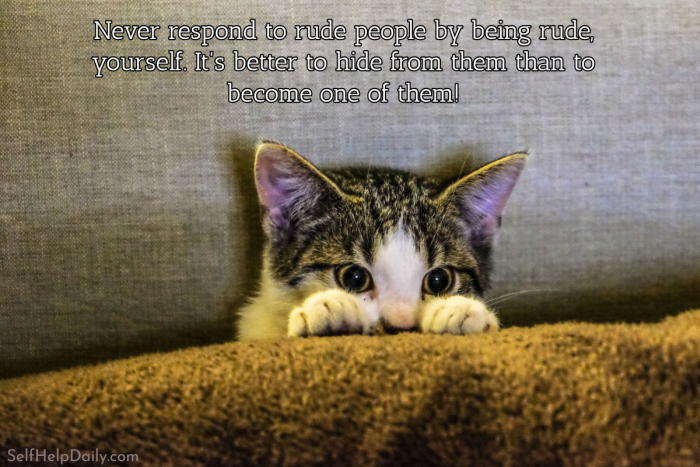 I’m a student of people and their behavior.   Whether it’s a rude person I encounter online or a sweet, talkative girl in the line Starbucks (with an adorable Canadian accent I could have listened to all day), people fascinate me.

I’ve noticed a few changes lately in temperament.  I realize it’s ridiculous to talk in generalities, so let me preface it by saying that these observations don’t mean that EVERYONE (thanks be to God!) is falling victim to these traits.

So many people have become so rude and inconsiderate that they’re looking and acting less and less… well…  human. How about celebrities, politicians, and others on social media that spout off insensitive opinions that aren’t just ridiculous, they’re downright hurtful? They come across as though they haven’t an ounce of tact or consideration whatsoever.

It’s not just celebs, politicians, or rude people on social media, of course. There are also the rude drivers, shoppers, workers… the list goes on.

Thankfully, kind people still outnumber the jerks. A while back, I mentioned on Twitter that I had the flu and bronchitis (yes… at once.. I’m an overachiever) and I heard from many people wishing me a speedy recovery. Even closer to home, my family went out of their way to make me feel better — checking on me, waiting on me, and showing their love and concern in many ways. In spite of coming close to my germs.

Among all of the “crusty” individuals in the world today, it’s always good to see that plenty of hearts haven’t been hardened.

Another trait that’s becoming rampant is selfishness. Fewer people will go out of their way to help another person than ever. I’ll be the first to say that everyone should try very hard to help themselves, hence the name of my blog: Self Help Daily. But sometimes that’s just not possible. It hurts to see so many people wrapped up in their own world that they can’t even see other people’s needs.

You see it in store and restaurants all the time. A child makes noise (news flash: children do such things!!!) and grown adults within earshot act like they have been personally attacked. Heaven forbid they actually smile at the child and the adults working feverishly to quiet him or her. It’d be a much better look than scowling in their direction every ten seconds.

I also see self-absorption online on a regular basis and, again, social media is making it (in my opinion) more of an epidemic than it it an inconvenience.  20 years ago, it’d would seem so STRANGE for someone to spend upwards of 30 minutes getting “just the right picture of themselves,” then taking said picture (the best of the bunch, of course) and showing it to everyone in their family, all of their friends, and everyone in town.

We’d have thought they were nuts! But today, it’s the norm.  Back then, we’d have thought, “They must think they’re pretty cute to want to show themselves off,” but today it’s “normal.”

Well…. supposedly it is.

Selfies do not make individuals selfish or self-oriented, obviously. However, they are a clear indication that our society is more ME-focused than it  has ever been before.

Due to the economy, it seems that a lot of people are working themselves into a fevered pitch. They’re trying to do half a million things at once (maybe that explains the cranks). There’s nothing wrong, of course, with pushing yourself to get the most from life. The thing is, very often when you’re pushing yourself, you’re pushing others around you who…well…don’t want to be pushed. When we overestimate all that we can conceivably do, we start handing out our “to do’s” to other people. It’s as though we take our own to do list and tear it into fourths. We know we can’t do all of it, so we hand it out to others – basically creating their to do lists for them. As though they don’t have their own lists!

When we get to that point, it’s either time to barter for favors with them, or realize that we’re spreading ourselves way too thin.

I started thinking about these Human To Do lists when I read about a woman who was furious with her husband for not doing everything she’d left on his “list.” When asked why she thought he didn’t get to them, she said he’d “probably blame it on” the fact that he had two jobs.

It may sound like a line from Little House on the Prairie, and for that I apologize, but we should all remind ourselves of the Golden Rule. We should treat others the way we’d want to be treated. No ifs. No ands. No buts. And certainly no butts.