You are here: Home / Archives for habits 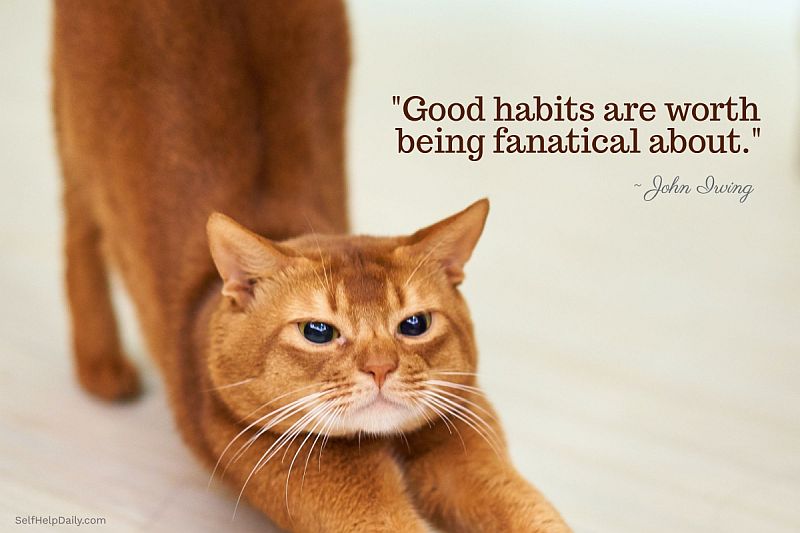 “New habits make new horizons. Silently and imperceptibly you are forming habits which will ultimately determine the degree of you happiness and success.

Closely guard the quality of your thoughts, that they may lead to right habits and thence to right living. Recognize and use such supreme qualities as courage, faith, humility, loyalty, temperance, and integrity.” – Grenville Kleiser, Inspiration and Ideals, 1917

New habits make new horizons. What an amazing quote, what an amazing lesson.  I honestly don’t have anything to add to what Grenville Kleiser said in 1917.

Click the following link  for an article I just wrote on Out of Bounds.  But first, write down Kleiser’s quote!

The Pursuit of Happiness or How to Be Happy A few days ago, my male cats (Bo and Svenn) were helping my in the yard.  The disastrous ice storm here in Kentucky did a real number on trees, and since we have a virtual forest in our yard, we had limbs and branches down like you wouldn’t believe.  It honestly looked as though a tornado had torn through.

My husband was out of town and I thought he’d be glad to see a lot of the work done when he came back.  My boys followed me every step of the way.  They were delighted with the entertainment and I loved the company.

They watched as I dragged most of the heavy limbs and carried the ones that could be carried.  Some were so heavy they had to stay right where they were.  The rabbits under one of them appreciated it greatly.  My brave, tough boys just peeked through the branches at the rabbits and turned away.  Fortunately for the rabbits (and for me who would have tried to stop it), my only cat who would have given chase and sent fur flying is now a house cat.

Her brothers are big softies.

It wasn’t long before I realized that, although the large limbs had to be dragged a great distance and taxed what few muscles I own, the small branches were much more of a headache.  They required frequent bending over as I gathered them up and it seemed as though I never gained on them.  They were great nuisances, in spite of their innocent appearance.

Bend over… straighten up… squat down… straighten up..  I found myself preferring the big ones because they required one big tug and that was that.

It occurs to me that many of our habits are like these sticks.  Many of the negative traits or habits that hold us back are usually the small ones.  These “stick habits” add up and can cause some serious damage in our lives.

What are some stick habits or traits?

It seems to me that when we have large habits, we often find a way to “muscle up” and control them.  We KNOW they’re there, they’re too big to miss!   Some of these include smoking, overeating, not controlling your weight, spending too much money (shhhh), lying, etc.  These big bama jammas are so in your face that we couldn’t ignore them for long if we tried.    All the while we’re looking at these larger ones, the smaller habits just keep lying there, causing a perfect mess.

That’s how it was when I was cleaning the front yard.  I hauled limb after limb after limb – then on one of my last trips back to the front of the house, I noticed that there were only a couple of large limbs left.  My mind started to celebrate by mapping out the rest of the afternoon’s schedule – warm shower, chili for lunch, a pot of coffee, an Andy Griffith episode, perhaps a second warm shower (what can I say, I was freezing).  Then when I pulled away a few of the big limbs, I noticed what had to be a gazillion sticks and branches.   Andy and Barney were going to have to wait.

Our “Stick Habits” Keep Us.

Take a good close look at your negative habits.  Not the big ones (at least not this time), lean in close and observe the small ones.

Once the stick habits are there in plain view, pick them up and throw them out of your life. Naturally, breaking a bad habit isn’t as easy as picking up a stick lying on the ground in front of you.  Especially if it’s a habit that’s been “in place” for years.

These are the toughest to get rid of because it feels like they’ve “taken root!”

The trick is to… wow, can’t believe I”m having to say this… stick with it.  If you were to carry a stick to a pile, you’d need to keep your fingers wrapped around it the entire time, right? If not, it’d fall to the ground.  When you’re dealing with a bad habit, you have to keep your fingers wrapped around its neck the whole time. If not, it’ll take YOU to the ground.

Keep telling yourself that you’re bigger, smarter, and infinitely more powerful than this “little” habit.  Realize that you, after all, created it – not the other way around.  What’s more, if you created it, you can destroy it.

Just remember to keep your fingers on the stick. Don’t let go.  They say it takes 3 weeks (or 21 days) to BREAK a habit or to “cement” a new habit.  Keep your eye on the calendar, even if its the one in your mind. There’s an end to the road, just like there’s an end to yard work (*Insert sigh of relief right here) – the trick is just to keep going.

Mark my words, it will make a huge and profound difference in every area of your life when you break even the smallest bad habit.  Cast them away so far that you can’t even see them any more, then do everything in your power to make sure that nothing carries them back into your life.  It won’t be long before people around you notice the difference as much as you do.

A lot of hings that were so wrong will suddenly be so right.