You are here: Home / Archives for quote graphics 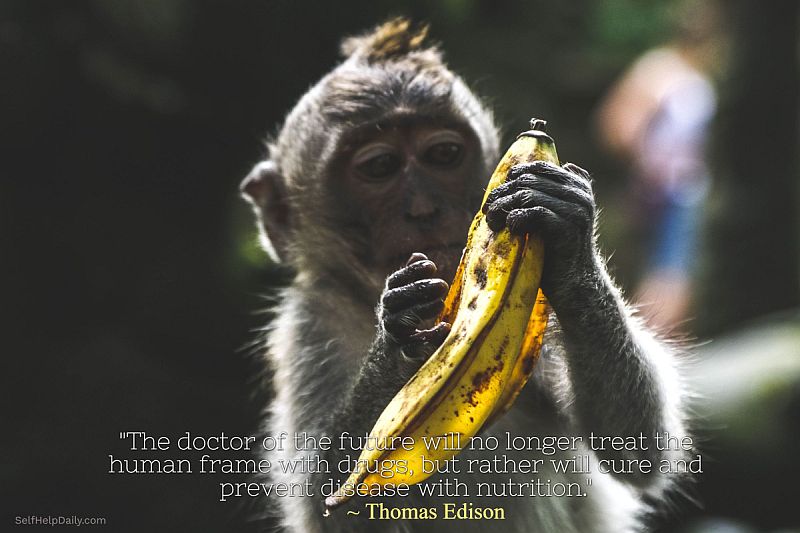 While “You are what you eat” is one of the best known quotes about healthy eating, I personally love this one from Thomas Edison a lot more.

“The doctor of the future will no longer treat the human frame with drugs, but rather will cure and prevent disease with nutrition.” ~ Thomas Edison

I would love to see more doctors discussing food with their patients – not necessarily more than medications that could be helpful but at leas as much as.  Whether it’s to prevent problems, help problems, or even alleviate them… the truth is the foods we eat can be incredibly helpful.

Problem is, not all doctors dive into nutrition (to be fair, lately, when would they find time do do any extra research?!) as a preventive measure let alone a cure. It’s often up to us to do our due diligence and research (from highly reputable sources, of course)…. then bring them up to our doctor and see what he/she says.

I asked one of my doctors, years ago, about an herb I’d read about being helpful for asthma. She actually wrote the name of the herb down and said she was going to look it up and research it. She apparently believed strongly in herbs and natural healing and simply hadn’t read enough about this particular one yet. She said she’d let me know what she’d found on my next visit and she did.

If you don’t have a doctor as cool as this particular doctor… find one! Some Days There Won’t Be a Song in Your Heart. Sing Anyway.  Beautiful!

This Emory Austin quote reminds me of a day a few months ago when I found myself walking around my kitchen wearing what surely must have looked like the Grinch’s expression.

I had hurt my back, and possibly even cracked a rib, by falling against a concrete picnic table.

I’m graceful, if nothing else.

The pain was relentless and I was getting, probably, three total hours of sleep each night. When you’re running on little sleep and big pain, even coffee doesn’t help your countenance.

I decided to go all “Self Help Daily-esque” on myself. I smiled at my cat (and I’m pretty sure she raised her eyebrow at me) and declared her to be the most beautiful cat in the world – a fact she already knew.

I looked out the window and smiled at the birds, squirrels, and trees. Not one smiled back, but that was okay. When I walked back through the kitchen and poured myself another cup of coffee (all theories have to be tested, you know), I realized that I was no longer wearing a Grinch expression because I no longer felt like him.

Sure, the pain was still there and the yawns were piling up on one another – but I was smiling. My mood was lifted simply because I decided that’s simply how it must be.

Sing anyway… or, at the very least, smile! True story:  When I was on the verge of high school, I was in a department store shopping with my mom and my one of my best friends, Tamra.  We were shopping for back to school clothes and Tamra and I each had a certain amount of money to spend.  I will just go ahead and admit it – I was up to my elbows in the “hot new” and “popular” clothes. Calvin Klein jeans, crazy colored tops, and.. of course… the coolest of the cool shoes.

At some point, I was mid-rant about the price of a pair of jeans when I realized I’d misplaced my buddy. While my mom scampered off to look at something else (and to probably escape my “How can I get everything I simply must have if the price tags are so unfair?? Life isn’t faaaaiiirrr….” meltdown), I went off in search of Tamra. I found her in a section of clothes I didn’t even know existed – inexpensive ones.

She said some sort of nonsense about being able to actually get MORE clothes if she bought CHEAPER clothes.

I’m sure I wondered how she and I were even friends at that point. I mean, what was with this girl?

Trying to save her from herself, I leaned in and whispered something like, “But no one’s wearing these clothes.”

My buddy supreme lit up and said, “That’s why I love them – I’ll be the only one!”

I’d LOVE to be able to say that the early teen version of me had a moment of clarity and tossed down my Calvin Klein’s and pulled out some clothes from Tamra’s goldmine but, alas, I did not. Enlightenment was a word I could probably barely spell, let alone claim ownership of.

We were going to be entering high school for the first time, I was not going to do it in clothes that weren’t all the rage! I would not walk through those doors without the most expensive jeans in the store on my behind!

After about two hours (feeling sorry for my mom yet?), we left the store.  Tamra had more bags than me… more clothes than me.. and even had money left.

I thought possibly she was an alien. I walked out with my bag… yes, BAG.. felling like I had just won the shopping game.

Funny thing, though, my mom went on and on about Tamra’s approach. Praised her as we walked to the car… praised her as we ate the lunch she treated us to… at one point, it hit me that all this “praise” was as much for my benefit as it was her’s.   She kept looking at me as she said words like smart and thrifty.. and something about stretching money.  I’m pretty sure the whole lunch thing was so I could hear about “making the most of your money” and “making it last.” How “clothes were clothes” blah blah blah.

Great. So now I had two aliens.

Oddly enough, over the years I came to realize that… of course… I was the one who “didn’t get it.”  I was too preoccupied with wearing what the other kids were wearing to realize that the greatest thing in life is to make your own way, be yourself, and not worry about who anyone else thinks you should be.

Or what they think you should wear.

The whole enlightenment thing didn’t hit me until I was in my Senior year of High School.

It finally became clear to me that the coolest thing in the world was to stand out from everyone else… not blend in.

Whether it’s what you wear, how you do your hair, how you walk, how you talk, or any dang thing that makes you you…  don’t let anyone try to re-make you or re-do you. I don’t care whether they think their intentions are great or not.  They don’t have the right. It’s YOUR life.

They have their own.

Truth is, if anyone tries to make you into something or someone you’re not, they’re actually the one with the problem, not you.  If they were completely comfortable in their own skin and at peace with life, they’d have better things to do than worry about your hair. Or clothes. Or anything.

Personally, I cannot imagine taking issue with something personal about another individual. If they’re mistreating someone or putting someone else at risk… sure, I’d have to say something. But if they want to braid garlic cloves into their hair and dress in sackcloth, I’m not going to let it rock my boat. I won’t sit downwind from them, but I’ll let them stink if they want to.

There’s an old Polish proverb my husband loves, “Not my circus, not my monkeys.”  Pretty much I think you could also say it this way: “That’s none of my dang business, so I’m going to just do me!” A goal is a dream with a deadline. – Napoleon Hill

One of my favorite authors of all time is Napoleon Hill. He was a brilliant man, in every sense of the word, and I simply cannot read a single paragraph written by Mr. Hill without wanting to take on the hounds of Hell with my Swiffer mop.

Napoleon Hill was born in 1883 in a one-room cabin on the Pound River in Wise County, Virginia. His life as a writer began at the ripe old age of 13 when he became a mountain reporter for a small town newspaper.

This mountain reporter went on to become one of the greatest forces the motivational world has ever known. Men and women will quote this great man forever because his words will forever be worth repeating. Napoleon Hill passed away in November 1970 but not before securing a beautiful legacy anyone would be proud of.

For today’s Thursday Throwback, I’d love to direct you to a wonderful piece of writing by Napoleon Hill titled Three Feet From Gold.